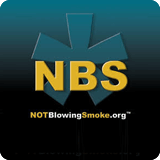 Not Blowing Smoke is a nonprofit corporation formed in response to the California Department of Health’s misleading anti-vaping campaign, which to date, has spent upwards of $15 million dollars of taxpayer money. The organization was founded in March 2015 by Stefan Didak, a nationally recognized consumer advocate for vapor products with assistance from Jason Downing. Shortly after founding, Danielle Bloss, the creator of the Truth About Vaping video series, joined the team and the three formed the board of directors.

We are dedicated to providing the public and government officials with the truth about vaping. Not Blowing Smoke operates completely independent of industry influence, although we do receive limited funding from strategic partnerships.

The specific purpose of the organization is to ensure continued and affordable access to vapor products in order to help smokers and those around them lead improved lives, free from the death and disease caused by combustible cigarettes. Our focus is on raising public awareness through educational and promotional campaigns as well as actions to represent the interests of both industry stakeholders and consumers, within the meaning of Section 501(c)(6) of the Internal Revenue Code.