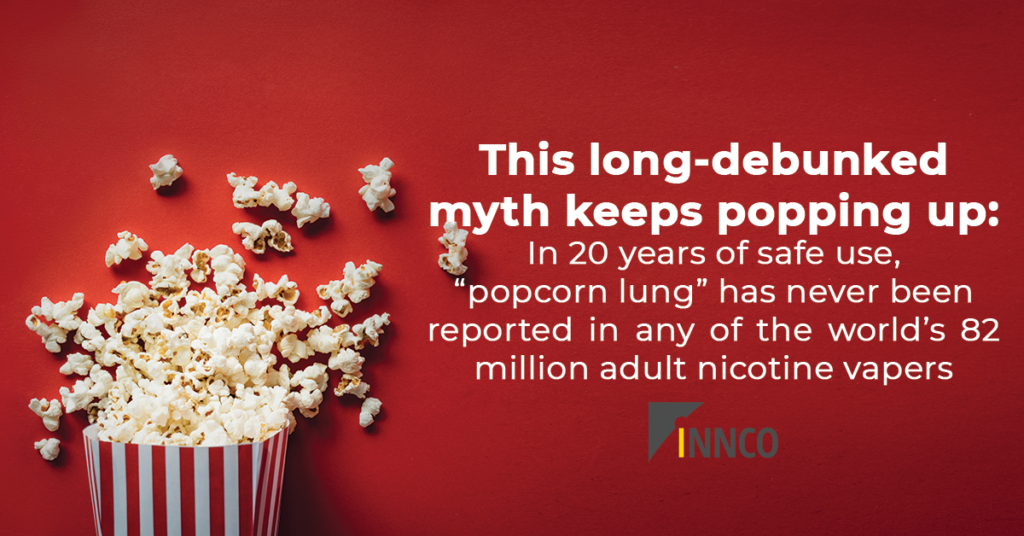 In 20 years of safe use, “popcorn lung” has never been reported in any of the world’s 82 million adult nicotine vapers

Geneva, Switzerland, 17 November 2022 – For many years, nicotine has been demonised by tobacco control “experts” to discourage smoking. While ending smoking should be EVERYONE’s collective goal, violating Truth-Telling to achieve that goal is unethical. Worse still, it condemns smokers to a needless death sentence without giving them a way out. Nicotine itself does not cause cancer, cardiovascular or lung disease. It is the smoke created from combustion of cigarettes that causes harm. Therefore, safer nicotine alternatives to toxic forms of tobacco should be promoted to save smokers’ lives. Not doing so is negligent homicide.

Appearing on ITV’s “This Morning” months ago, alongside TV presenters Alison Hammond and Dermot O’Leary, Doctor Sara Kayat launched an unsubstantiated warning regarding nicotine vapes (“e-cigarettes”).  She said “there are lots of other concerns that are starting to bubble… The most concerning are lung injuries. There’s a condition [called] popcorn lung. It’s an inflammatory lung disease that can occur as a result of vaping.”

But, there’s no evidence to prove her claims and this kind of misinformation is counterproductive to ending tobacco smoking. When health professionals make “guesses” based on cases that have yet to be thoroughly investigated, and present those guesses as facts, the result is fear and unwarranted concern which ends up disabling people from making informed decisions about their health and wellbeing. Discouraging people who smoke from switching to much safer alternatives such as nicotine vapes is tantamount to causing a public health tragedy.

In 20 years of use by (today) 82 million adult nicotine vapers worldwide, there has been no confirmed death ever caused by nicotine vapor, and no case of popcorn lung. “Popcorn lung” or bronchiolitis obliterans (or Popcorn Workers Lungs), was discovered when eight former employees of the Gilster-Mary Lee popcorn plant in Jasper, Missouri, USA, developed bronchiolitis obliterans caused by the constant inhalation of Dacetyl, a chemical used to produce Buttery flavored popcorn.

If a constituent in nicotine vape liquids is found to be harmful, ex-smokers who use safer nicotine vape products obviously want that constituent removed.  We have been calling for evidence-based safety standards for more than ten years now.

In a statement by what is now called the UK Health Security Agency (formerly Public Health England) regarding common misconceptions and myths about nicotine vaping, the primary health body of the United Kingdom said:

One of the most commonly held concerns is that e-cigarettes might cause ‘popcorn lung’. This came about because some flavourings used in e-liquids to provide a buttery flavour contain the chemical diacetyl, which at very high levels of exposure has been associated with the serious lung disease bronchiolitis obliterans. However, diacetyl is banned as an ingredient from e-cigarettes and e-liquids in the UK. It had been detected in some e-liquid flavourings in the past, but at levels hundreds of times lower than in cigarette smoke. Even at these levels, smoking is not a major risk factor for this rare disease.

INNCO, a non-profit alliance of 37 independent volunteer-led Member Organisations around the world dedicated to defending access to harm reduction alternatives for people who use safer nicotine to avoid toxic forms of tobacco, carefully monitors news and scientific articles to ensure consumers are appropriately informed of the benefits and unwanted consequences of all harm reduction products.

Last year, INNCO released a call to end the misinformation surrounding lifesaving harm reduction alternatives through a “Misinfodemic Dossier”.  The report lists 9 reasons why major questions need to be asked of any entity or person taking an anti-harm reduction stance. It also calls on governments around the world to hold to account their perspectives, relationships, and actions in relation to tobacco control.

Dr. Charles A. Gardner, Executive Director of INNCO, said: “This ‘popcorn lung’ myth is one of the most effective disinformation memes in the war against nicotine harm reduction.  In a way, I admire the reprehensible harm reduction deniers who invented it. No matter how many times independent experts debunk this myth, it keeps popping up. INNCO, on the other hand, must stick to dreary facts and verifiable evidence.  These are not as catchy or click-bait worthy.  Reality may be a yawn-worthy meme, but we will stick to truth. And truth will, eventually, prevail.”

INNCO abhors misinformation and desperately hopes the day will come when tobacco control experts will begin to put their efforts into actually ending tobacco smoking by listening to and learning from people who have quit successfully. INNCO notes that the World Health Organisation’s Framework Convention on Tobacco Control (FCTC) 10th Conference of Parties (COP10) will be held in November 2023, in Panama City. If history repeats, then our application for Observer Status will be denied as it was in COP9 (2021) and COP8 (2018). Most journalists will be expelled as well, as they have been at all previous FCTC COPs. We wonder why climate change COPs are inclusive and transparent, while tobacco control COPs are consistently hidden behind a smoke-screen of secrecy. The 112 million People Who Use Safer Nicotine (PWUSN) to avoid toxic forms of tobacco deserve a seat at the table when UN bodies discuss policies that affect us.  Our continuing exclusion is a shocking violation of human rights, social justice and public trust.About us:  INNCO is a global community of ex-smokers helping smokers quit, and defending the rights of 112 million People Who Use Safer Nicotine (PWUSN). Safer alternatives include nicotine patches, nicotine gum, nicotine lozenges, nicotine pouches, nicotine vapes, snus and heated tobacco products. Smokers’ access to nicotine harm reduction is both a human right and a life-or-death issue. INNCO is a non-profit alliance of 37 independent volunteer-led Member Organisations around the world. We are funded by in-kind contributions and small donations from thousands of adult ex-smokers. Our Secretariat (but not Member Organisations or Governing Board) is supported by a $0.9 million/year grant from the Foundation for a Smoke-Free World (FSFW), a US nonprofit 501(c)(3) independent global organisation with a mission to end smoking in this generation. FSFW accepts charitable gifts from PMI Global Services Inc. (PMI). Under FSFW’s Bylaws and Pledge Agreement with PMI, FSFW is independent from PMI and the tobacco industry. INNCO is, in turn, independent of the Foundation. We are transparent about all this. In contrast, two unaccountable foundations (Bloomberg Philanthropies and The Truth Initiative) are currently spending over $200 million/year to oppose nicotine harm reduction. And their grantees never declare this for what it is:  An obvious Conflict of Interest.